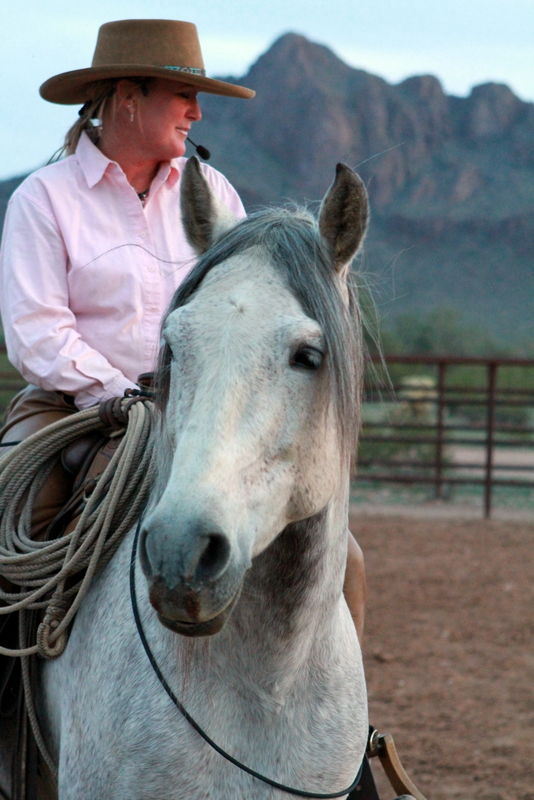 I was born in the Netherlands.  As a young child, my family immigrated to the US and settled in Tulsa Oklahoma, where I was raised.  When I was 13, I started taking English riding lessons at a hunter/jumper stable.  I worked cleaning stalls to pay for my lessons.  When I turned 15, my parents bought me my own horse, a 3 year old thoroughbred mare from the racetrack.  Boy, she was pretty, but I remember not being able to walk in her stall because she was so afraid of humans.   I spent every minute I could with her and somehow ended up re-starting and gentling her myself.  I wasn’t afraid of anything and could ride her anywhere.  However, no one else could ride her.  She definitely did not trust other humans, just this human.  Looking back now, I realize I was just really lucky I didn’t get hurt.

I earned my BS degree at UCSD in Animal Physiology and Neuroscience, wanting to become a vet.  Putting myself through college with bills piling up, I decided I didn’t really want to go to school 5 more years, so I decided to look elsewhere for what I could do with animals.  I was fortunate enough to become an animal keeper at the San Diego Zoo.  What an awesome experience it was.   I cared for and trained many animals from apes to bears, big cats to river otters.  I shared my knowledge with the Zoo visitors by giving tours and presentations and wrote articles for the Zoo News magazine.  I worked at the Zoo for 15 years, eventually becoming a Senior Keeper.

While I was still working at the San Diego Zoo, I met my husband Mike.  He’s the one who brought me back into horses.  In 1995 we bought a small ranch outside of San Diego and settled into the country life, but we didn’t have any horses.  He had ridden horses as a kid, but never owned one.   To make a long story short, we bought a couple of young horses and started raising them on our own.  A friend or ours had Pat’s Western Horseman book and let us borrow it.  We read it cover-to-cover and applied what we learned on our young horses.  We found the web site, contacted a “Level Two” instructor (back then there weren’t that many instructors around), passed our level one and got our Red Strings.

I met 6-Star Parelli instructor Dave Ellis, early in my education and he assessed our level two and eventually my level 3.  This was back when instructors could assess in the field.  Since then, Dave has become my mentor and dear friend.  I’ve spent a lot of time with him at clinics and at his ranch near Porterville, California.  I have been attending the University at the Parelli Center every summer since 2001.  The one exception was 2003, where I spent a month in Montana with Ronnie Willis starting colts.  I passed my Level 3 in 2003, and in 2004 I became a 1-Star instructor.  In 2005, I became a 2-Star instructor and 3-Star in 2006.  I passed my level 4 in all 4 savvys in June of 2012.   I spent a month riding with Pat Parelli in the Mastery Program in 2010, where I again learned a lot of Level 5.  In 2011, I did a Game of Contact course with Linda Parelli where I was allowed to bring a stallion, Panadero.  In 2012, I attended a month long Advanced Horsemanship class with Linda Parelli, learning about Level 5 and Contact.  2013 and 2014 I was able to teach a 4 week Fast Track course and in 2015, I taught liberty, Fluidity, and Trail Riding at the Parelli Campus.  I grew as a teacher being able to teach on campus in Colorado.   2016 I was promoted to 4 Star Senior Parelli Professional.  In 2010, I took up the discipline of Dressage and competed in Open Division. 3 Open championships were won in San Diego.   I  participated in “Road to the Summit” where a selected few of us donate our time developing and starting an Atwood Colt as a yearling into its two and three year old year.  At the Annual Summit in Colorado, there is a challenge to showcase our colt and an auction goes up.  All money is raised to go to the Parelli Foundation, a non-profit organization that helps therapeutic centers, rescue horses, youth, and scholarships.  It is a never ending journey, this learning of horsemanship.

The last two years my new Challenge is Working Equitation.  It is a wonderful sport with 4 events;  dressage, ease of handling, speed, and cattle.  2019 Panadero and I got 4th in Nationals. I have gotten permission to teach intro to Working Equitation which fits right up Parelli’s alley.I love every minute I get to spend teaching students to be perfect partners with their horses.  I am so blessed to have this be my profession.  Horses are amazing creatures that have been put on this earth to teach us so many things about ourselves.  Like Tom Dorrance once said “the outside of a horse is good for the inside of the human”.   Mike and I live on our ranch in Valley Center, (San Diego county), California.  We have a few horses here and are lucky to both enjoy them together.

I would highly recommend Margit, she is an incredible teacher and trainer. She has helped me so much with my horse, I could not have done it without her. She is kind, compassionate and gives clear concise advice. She also puts on great clinics, I learn so much from her every time I go to a clinic or to her ranch.

I can not say enough great things about Margit Deerman as a trainer and person. I had a great idea, as I rounded the bend on 60, to purchase a 2 1/2 year old quarter horse sight unseen. A friend owned a brother to this horse, so I thought that was a brilliant idea to buy him at the time. That is where reality left fantasy. I really did not have the tools in my quiver to train him and assist him with becoming the horse he is today. Thank goodness I was blessed with Margit in my life. He had the opportunity to train with Margit and attend her summer camp and have so many experiences that were fun and built his confidence. She then worked with me to build our trust, relationship and confidence together. He is now 9 years old and a wonderful, gentle, well grounded horse. He actually is the go to for my grands to sit on and ride, ages 12 to 10 months. I continue to work with Margit and have learned so much from her. She has such a gentle, non-overbearing and clear way of teaching horsemanship and the Parelli method. I can not recommend her highly enough. Thank you, Margit.

Training in the Parelli method with Margit opened my eyes to incredible avenues of communication with horses that I hadn't been able to tap into before. I've deepened the bond with the horses I work with and ride regularly through what I have learned and my increased ability to communicate with them in the way they communicate with each other. Understanding equine behavior at that level has been instrumental in the development of my horsemanship skills and shown me how much more I can learn and grow as a horsewoman. Margit has a beautiful setting at the ranch to truly connect with the horse and she is a wonderful, patient teacher who truly has a heart for the wellbeing of the horse and human relationship.

We connected with Margit as an instructor in 2010. Every lesson, clinic or workshop with Margit is packed with helpful information. Margit is so perceptive with her instructing. She notices little and sometimes bigger changes that you can make to cause a big difference in your success with your horse. And she manages to do it in a very positive way. Sessions with Margit are not only packed with information and educational, they are fun too!